Last week, we bought a second xbox one console to our home so both me and my son could play Destiny together. That’s a great game by the way, I would say it’s worth to buy a xbox one just for that game alone.
Playing the game worked fine, but when we tried to use Voice Chat. We are in different part of the castle, ehhh mansion, ok…house! I’m upstairs in my cave and he’s downstairs in his lair and to not make the wife crazy with yelling to each other, we are forced to use xbox party chat.  Voice chat worked for a while and then stopped. Reforming the party made it work again for a couple of minutes and then the voice part stopped working. A bit annoying as it always worked until it was about time for a boss fight, so not really time to start fiddling with the party settings at that time.

We had not had this issue with our xbox 360 consoles, so something was different with Live on xbox one in regards to networking. A quick check on internet showed that this was a common problem from a lot of people trying to use two or more xboxes on the same network. With as usual, a million different ways to eventually solve it, including standing on your head and count to ten while you eat a raw egg which had solve it for some dude, or not.

First of all, the problem is NAT.
You only have one external internet address, that you got from your ISP. So all devices on the inside shares that external ip when they access internet through your modem or router (depending if you use ADSL or Fiber).
When two xboxes tries to talk to each other they use specific ports to do that on. And if those ports are not open, they can’t communicate. Also, one port can only be used by one xbox at a time. On the xboxes, open Settings and then Network, it will show you what kind of NAT settings the xbox has detected.
NAT: Open is the best one and you should be good to go!
NAT: Moderate  is quite good and will work in most cases.
NAT: Strict will give you headache, that’s what we had on both xboxes.

As mentioned above, xbox live uses specific ports (plus games use their owns too) and those ports needs to be opened and forwarded to your xbox. Well, Port Forwarding works fine when you have just one xbox. Because you can’t forward the same port to two destinations, it’s a 1-to-1 relationship. If you do setup Port Forwarding, you may get one of the xboxes to work fine, but the other will have issues with voice chat and playing games with others.

The solution to the whole problem is to use something called UPnP.

Universal Plug and Play (UPnP) is a set of networking protocols that permits networked devices, such as personal computers, printers, Internet gateways, Wi-Fi access points and mobile devices to seamlessly discover each other’s presence on the network and establish functional network services for data sharing, communications, and entertainment. UPnP is intended primarily for residential networks without enterprise-class devices.

For that to work, the router has to have support for UPnP, which most network devices you use at home does have support for. Though, I’ll get back to some limitations with that in just a bit.
Obviously, UPnP has to be enabled in the router settings. 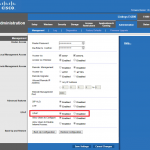 On my Cisco Linksys E4200 it’s done in the Administration and then Management page. But it could of course be in other places too, I think one of the more common places is around “Application & Gaming” settings.

On my previous router, to get UPnP to work, it was the one who had to handle all IP-addresses. When my other DHCP server offered IP-addresses, or a computer had a static IP it couldn’t use UPnP.
I guess that’s not an issue in most residential environments, it’s just myself and my fellow geeks who use another DHCP server at home who runs into issues like that.
Though in the solution I’ll describe below that’s not a requirement anymore. I could see how my computer with a static IP-address made some UPnP mappings.

I had enabled UPnP in our router in the past so it was enabled, and we didn’t have any port forwarding conflicting with the xbox live ports. But were still getting NAT: Restricted on both xboxes. A bit of searching on internet revealed that there seems to be a lot of routers with a poor implementation of UPnP which makes them unfit for this.
I guess my Linksys is one of those. As it worked fine with xbox 360 but not with xbox one.
I did find some poorly maintained list with routers that others had confirmed works with multiple xboxes, in case you want to see what they say about your model or want to make sure the new on you are looking at will work, have a look here.

One additional thing you may want to look into. I’ve not confirmed this myself at the time of writing. But it seems that your xbox only does the UPnP request for some of the needed ports upon start, and the rest later on when needed. So if you have power setting: connected standby (fast boot) it will not re-open those ports when it wakes. Our boxes are in the power save state, so it’s not an issue for us. And I hope Microsoft fixes that issue if it’s for real.
Some routers have support for showing the UPnP Port mappings so you can verify that it’s working, mine did not.

Anyway, to sum it up.
To use just one console in the network it’s possible to use either UPnP or manual Port forwarding of all the necessary ports to your consoles IP-address.
But if you have two consoles or more you will have to use UPnP (and remove any of the previous port forwarding rules you have in place that can conflict). Make sure your router has full UPnP support, and see if the issue still exist if you use power save mode.

If you still have a problem, these are of your options, and what I did:
Buy a new router which you confirm before that it has support for multiple xboxes. Search internet for the make and model (and version, v2 etc) and see if others have confirmed it works. Don’t ask the sales guy!

Upgrade your current router with a third-party firmware. For example, it’s possible to “rebrand” my Linksys E4200 router with the DD-WRT firmware to get new features, functionality and hopefully working UPnP.
It might sound scary and it’s nothing I would recommend my grandma to do, but if you just follow the instructions carefully it’s not that hard. Though if you don’t follow the instructions, you may end up with a dead (bricked) router so be careful.
To find out if you can upgrade your router, just use the DD-WRT Router Database here.
If your router is not supported by DD-WRT, it’s also possible to use a similar firmware from other projects called Tomato or Open-WRT.

In my case, I didn’t want to fiddle with the Cisco Linksys router. So I looked into upgrading our old Netgear WNR2000 (v1) which turned out was not supported by DD-WRT.
But I found out it’s possible to setup a virtual DD-WRT to replace the Cisco box! Which is exactly what I did. More on that in the next blog post, called: How to setup a DD-WRT Router with Hyper-V.